In and around the City of Saints

Grahamstown, affectionately known as the City of the Saints, has a rich history spanning more than 200 years. Founded in 1812 as a military outpost during the turbulent Frontier Wars, it evolved into a bustling city which was, for a time, the second largest in South Africa.

Though it no longer holds that particular title, Grahamstown is more famous today than ever. The city boasts more than 70 heritage sites. It’s home to the prestigious Rhodes University and some of South Africa’s top schools, and stands proudly as a centre of legal excellence. It’s equally well known for its diverse mix of cultures, exemplified by the annual National Arts Festival – a world-famous institution in itself.

Grahamstown is also the ideal gateway to many more of the Eastern Cape’s true gems, including a number of excellent Big 5 game reserves and several blue flag beaches along the pristine Sunshine Coast.

The City of Grahamstown 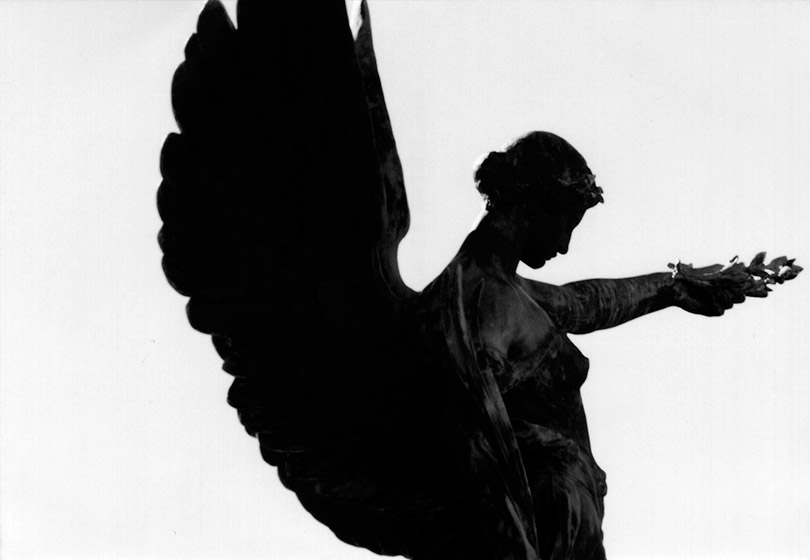 The Winged Angel of Peace in Grahamstown 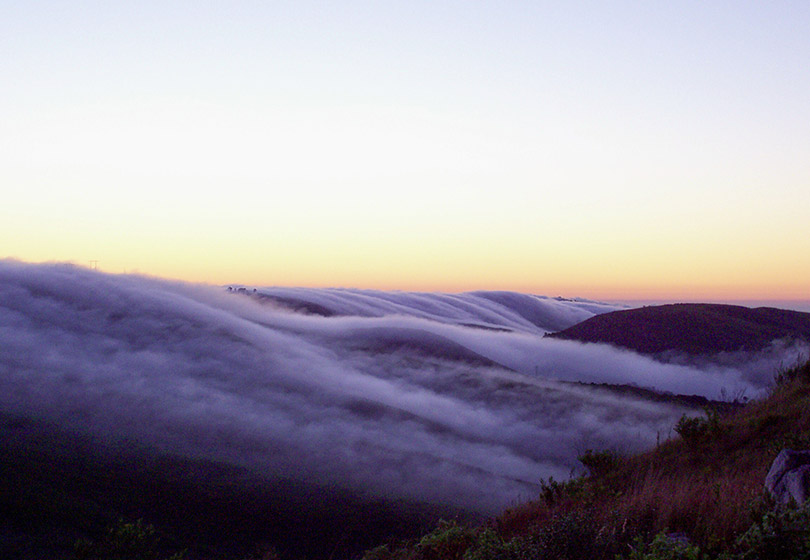 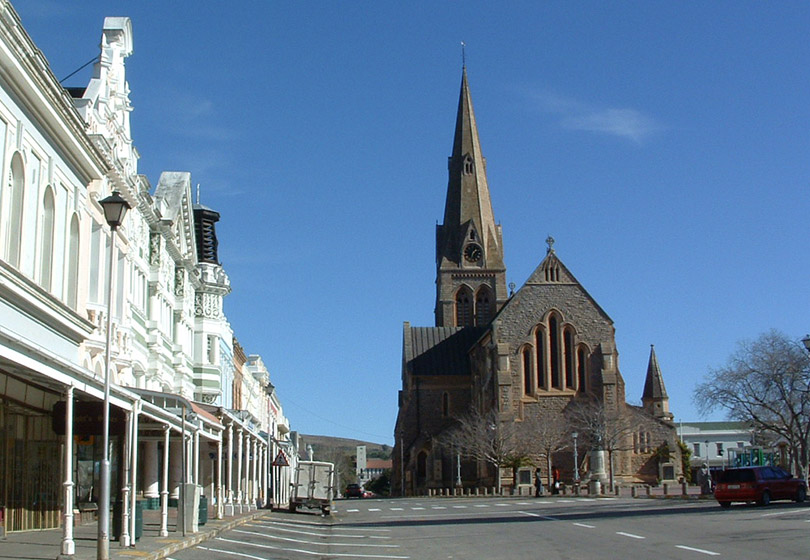 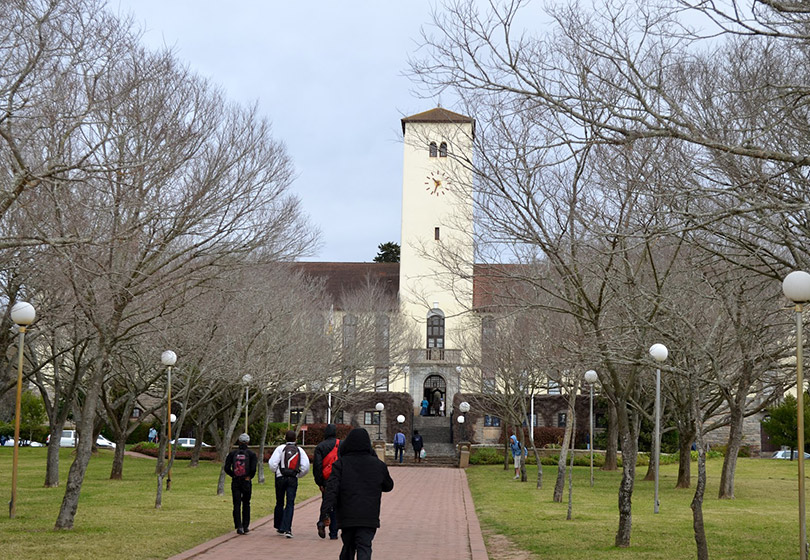 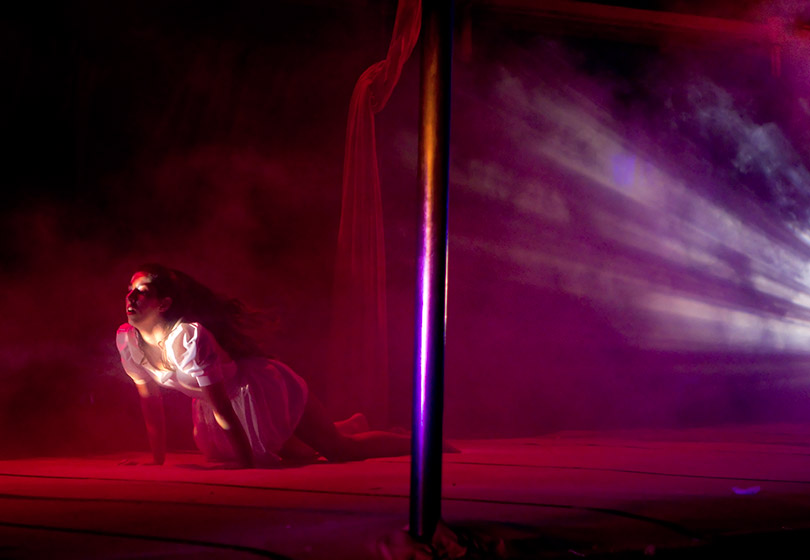 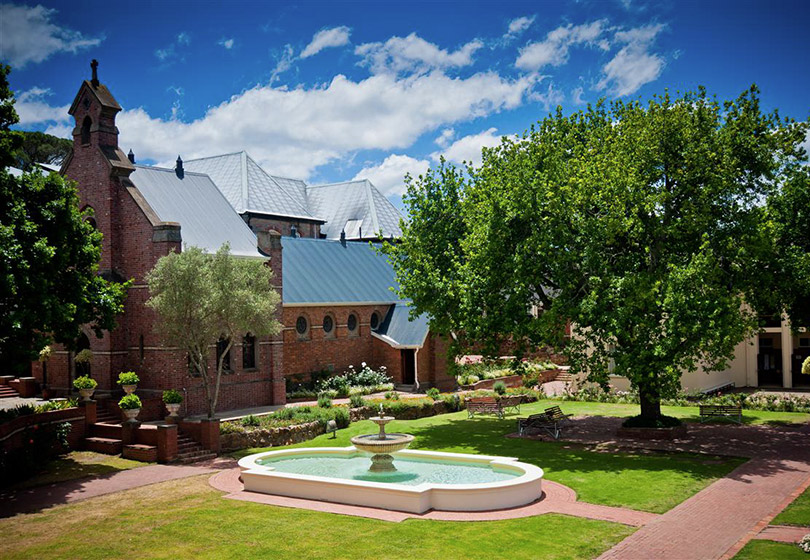 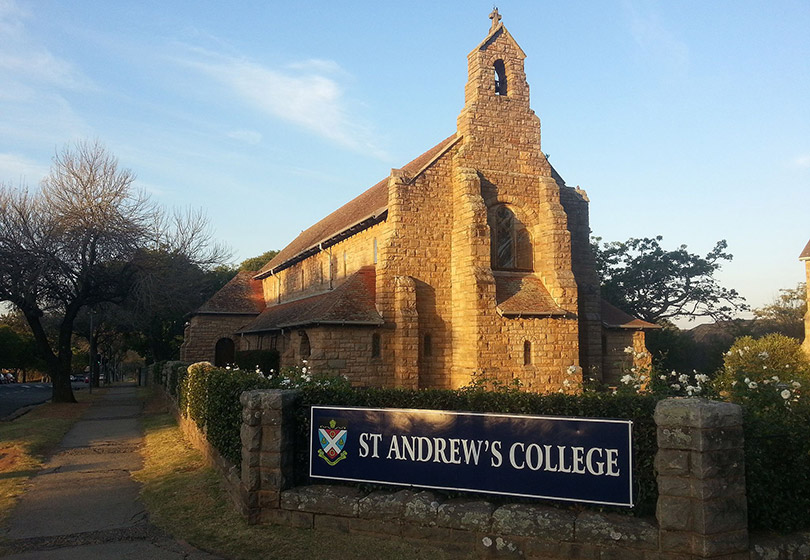 Discover more about our vibrant city and its surroundings by exploring these useful links:

Grahamstown, the legal hub of the Eastern Cape

Grahamstown is the legal hub of the Eastern Cape housing important legal institutions such as the Magistrate’s Court, the Eastern Cape division of the High Court since 1864, and Rhodes University Law School.

This coupled with multiple attorneys and lawyers based locally, accounts for the city’s large legal fraternity.

For an ideal base while visiting Grahamstown on business – plan for the day ahead, host a meeting or simply relax – The Milner offers the best in town.

Eating out in Grahamstown

Free WiFi. Fully licensed. Some tables under the pepper trees.

A fun place to be! Can get very busy late in the evening and popular with students.

Tables indoor and out in the sun. Good value meals.

Grahamstown is the only city in South Africa whose primary commerce sector is that of education.

This educational mecca is home to some of South Africa’s top schooling institutions and includes:

The Milner offers the ideal accommodation to anyone travelling to one of the many events held by the respective Schools. The Milner is located within walking distance of many of the Schools and offers a warm and welcoming environment for the entire family.

Rhodes University was established in 1905 and funded by the Rhodes Trust.

The university was conceived to satisfy the need of a high learning facility in the Eastern Cape as the schooling facilities proved inadequate to prepare students for examinations of the University of the Cape of Good Hope. From humble beginnings, Rhodes has grown to become an internationally recognised and prestigious university boasting the highest undergraduate pass rate in South Africa for any university. The University has become a beacon of research and cultural diversity hosting many events throughout the year such as SciFest Africa, The National Arts Festival, Graduation, Intervarsity sporting events, and many more.

When traveling for one of these events or simply visiting your children who are enrolled at the University, The Milner provides the perfect accommodation.

The National Arts Festival hosted annually in Grahamstown is the largest celebration of culture and the arts on the African continent, and is certainly a not-to-miss event for any cultural enthusiast.

The Festival runs for 11 days, generally running over the end of June into the start of July and can be separated into two main programmes consisting of Main and Fringe productions respectively. One can witness a wide array of cultural disciplines of display ranging from drama to stand-up-comedy, from opera to magic shows and from craft markets to jazz festivities.

The Festival, like so much that Grahamstown has to offer, is steeped in historical significance of the South Africa we know today. The Festival served as a platform for political protest during the heights of the apartheid era as it has always been open to all, regardless of race, sex or creed. Today it still holds its significance as a breeding ground of cultural innovation and development, whilst the no-censorship philosophy allows artists and cultural enthusiasts to explore news ideas and facets of culture.

Witness a wide array of cultural disciplines of display ranging from drama to stand-up-comedy, from opera to magic shows and from craft markets to jazz festivities

The Festival is an intense 11 days of artistry and culture and at times can be overwhelming. There is no better place to escape the hustle and bustle of the Town than at The Milner, where tranquillity meets luxury.

Kenton is nestled between the Bushman’s River and the Kariega River, and boasts some of the country’s finest blue flag beaches. This little village has a special place in the hearts of South Africans as the ideal holiday location for the entire family offering a wide range of activities from swimming to snorkelling , from skiing to relaxing on the beach, kiting to biking, and from fishing (of all sorts) to horseback riding, Kenton has it all.

The Milner forms part of The Oyster Collection of properties, with 5 tastefully appointed properties in Kenton-on-Sea – The Oyster Box, The Oyster Shack, Inverell Station, Ocean Breeze and Driftwood – all of which can be arranged for you to complement your stay.

The history of Grahamstown

Grahamstown has a rich history spanning over 200 years. Orignally Grahamstown was a small military outpost established by Lieutenant-Colonel John Graham in 1812 as part of the on-going effort to secure and stabilise the eastern frontier of the British Empire in, what was then known as, the Cape Colony.

This effort saw a great deal of conflicts arise between the British and the Xhosa’s, who had land further east.

The height of the frontier conflicts occurred on the 22nd of April 1819 where Xhosa warriors numbering in the thousands lead by the charismatic Nxele (Makana) launched a full scale attack on the Colonial forces.  The rampant Xhosa force’s confidence was spurred by their overwhelming numbers, outnumbering the colonial forces by 28 to 1.  Despite the Xhosa’s significant numerical advantage, it was the firepower of the British that was to be the order of the day. The battle lasted mere hours and ended in the surrender of Nxele and his subsequent imprisonment on Robin Island. From the battlefield several anecdotal tails have emerged, the most famous of them being the story of Elizabeth Salt.   According to folklore Elizabeth Salt, wife to one of the Colonial Soldiers, disguised much needed weapons and gunpowder as an infant she was cradling. She carried them into battle and delivered them to the troops in the garrison. It was the Xhosa honourable reluctance to harm women that allowed Elizabeth to deliver the ammunition that allowed the Colonial troops to fend off the Xhosa’s vast forces.

A year after the brutal battle of Grahamstown, the 1820 settlers landed in Algoa bay (Port Elizabeth). The Settlers were sent from their home country, in a double billed effort to ease rising unemployment in Britain after the Napoleonic wars and to consolidate the presence of the British Empire in the somewhat turbulent region of, what is now known as, the Eastern Cape. The Settlers were granted farms in the region and were given tools and aide against their deposit. Many of the Settlers were artisans and craftsmen by trade and severely lacked the agricultural knowledge needed to succeed in the region. This coupled with harsh living conditions on the frontier border led to many of the Settlers abandoning their farms to relocate to towns to pick up their respective trades they had left in Britain. The influx of the settlers and businessmen looking for new frontier opportunities, helped Grahamstown become a bustling centre of trade.

By 1930 Grahamstown was recognised as the second largest city in the country.

The rapid pace of growth was halted by developments in the Transvaal and a railway line running from Johannesburg to Port Elizabeth, which bypassed the city.

In the late 1800’s and early 1900’s Grahamstown would receive a second spur of development, however on this occasion it would not be in the commercial sense. The second wave of development was in the education sphere with the foundation of schools and later Rhodes University.

Grahamstown is by no means the second biggest city in South Africa anymore; yet it has evolved to become a melting pot of diverse culture with academic and legal excellence at the forefront of the Town’s identity.

The City’s rich and eventful history is brought to life through its age-old buildings and monuments.  The City boasts over 70 heritage sites, offering a unique exhibition of Georgian, Victiorian and early Edwardian architecture which is commonly regarded as the best in the country.  Some of the most prestigious building and monuments include:

The city has also become a hub for cultural development and diversity, with the National Arts Festival being hosted in its confines annually.

The South African Coronavirus lockdown has resulted in economic hardship for many vulnerable communities around the country. Our Oyster Collection teams took it upon themselves to make a difference in our local communities.

Visit our Oyster Collection Food Fund website for more info and to see how you can help.